"My NCS experience was amazing! I absolutely loved the activities and the new friendships I made. Some of the activities I did really pushed me out of my comfort zone, for example the Leap of Faith and 3G swing. All because I was scared of heights, but I had the best leaders that encouraged me to do these activities and I did it!

"When the summer came to an end I thought 'What could I do next to carry on doing NCS?' Then on the NCS Facebook page I saw a link which said I could sign up to do NCS Leaders course during October half term. I went through the first stage of questions, saying what I did on my summer NCS and what social action project my group chose. I got an email through saying I got onto the next round and I had to make a 30 second video on our journey on NCS and what we hope to do next. This video was to challenge our time keeping skills and to see what leadership skills we had learnt. I never would have imagined getting on the NCS Leaders week and when I found out I had I was so proud, but only when I got to Kent (where we stayed) I found out how hard it was to get on to it.

"My NCS Leaders week was held in Sevenoaks, Kent and we stayed in the Sevenoaks School. Leaders Week was amazing yet challenging. What I mean by challenging is making a bond with your group quickly and learning different leadership skills so the next day you can put them into practice in the London Challenge. The London Challenge was the best day out of them all because we went into London in our group and we had to navigate ourselves around Central London. We had a time limit of 2hrs to complete as many activities out of a possible 30 as we could. Also joining us on our Leaders Week were the NCS Alumni; they had a challenge for us too. For them we had to solve a riddle they gave us to find where they were in London. When we found them we got told our challenge was to start a flash mob of dancing to the 'cha cha slide' and to try and get as many of the members of public to join in.

"In our time limit we had to get to the South Bank Centre by 1pm and for every minute we were late we lost points; if you were later than 1.15pm you lost all of your points. My group made it in time. After lunch we went upstairs to a room and we saw an interview with BBC Radio One star Hugh Stevens and we also got to ask questions. It was such a pleasure to meet Hugh and find out about his journey and how he got to where he is today. "After the London Challenge and the interview with Hugh Stevens, we went to the Houses Of Parliament to meet our local MPs. It was such a privilege to meet Mark Prisk MP (Conservative MP for Hertford and Stortford) and talk to him about the things I would like to do in my community to make a difference. He was so helpful because he told me things I could do, the people I need to talk to help me with my project. I also spoke to him about my local youth centre and the project me and my group are doing now for Herts Young Homeless. He was very interested in hearing more young people speak about the community rather than hearing from the older generations. 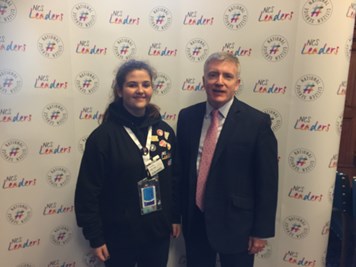 "On Wednesday my group went to the BBC Broadcasting House and got to do some interviews with Ben Cooper who is the Controller of BBC Radio One and One Xtra. The interview with Ben was very interesting he spoke about his journey and what his job role entails and how he chose it. We also walked around the Broadcasting House too see the radio studios and the live lounge. We saw one of the BBC Radio One presenters take on the Pringles challenge.

"On Thursday we did our presentations to the youth board. In the morning we wrote our speeches, making props and figuring out how to use our five minutes productively.

"We were given five minutes to talk about all the different leadership skills we had learnt, and how we put them into practice this week and how we will continue using them. We were given three points that we must include and we were not to go over five minutes, everyone in the group must say something and to make it stand out, to think about what would make ours stand out from everyone else's.

"In the afternoon we presented them to our judges. We were randomly chosen from numbers written on a ball. The wait was agonising; we just wanted to present ours! It was really good looking at everyone’s presentations and see what all of us had got out of Leaders' Week. It gave us a chance to hear other people's journeys that were not in our group.

"Doing the presentation was a big thing for me because I get very nervous talking to a big group of people - there were 107 of us leaders, the NCS Alumni and the Youth Board all in one room. For me to be able to stand up and have the confidence to speak to them was amazing and life changing for me. For me to know I have that confidence it has made me feel I can talk to any number of people now about subjects I feel strongly about. I am so thankful for Leaders Week because it has given the confidence to speak up on things that I have an opinion on and to be able to present anything to a big group of people.

"After all the presentations were done we all went to the talent show. It was such a lovely end to the week seeing every individual talent in the room. When someone performed a song that everyone knew everyone was singing with them it was such a lovely atmosphere and everyone joined in. It felt like one big family and by the end of the week; that was what we were.

"Friday quickly crept up on us and it was all time for us to say bye to one another. It was so emotional. To have us not knowing anyone at the beginning of the week to feeling like we have known each other all our lives at the end. The bonds and friendships people have formed during the week I would say will be unbroken for the rest of our lives. Being away with these amazing people I would definitely say I have made friends for life.

"There were so many good things about NCS Leaders Week. I think the best thing about it was meeting so many inspirational people and making new life-long friends. The inspirational people really made you think about what you as a person would do next to make a difference in your community. The people that stood out for me that we meet were Nicholas McCarthy, the first one-handed pianist to graduate from the Royal College of Music. He had such an amazing journey that he shared with us. Hugh Stevens, the BBC Radio One presenter, who shared his story of how he became a presenter on the popular radio show. That's just to name a couple. We met so many amazingly inspirational people that week it made you think of what you could achieve.

"On NCS Leaders Week I learnt so many new skills. The one thing that changed for me was my confidence. The highlight of my week was the presentation that my group did purely because I was able to stand up in front of everyone and speak about my journey and what I hoped to do next. I think me and my group performed amazingly, that was my proudest moment on NCS. I'm so grateful for everyone, for what we learnt and the tasks we did that week, it's definitely a weekly to remember!

"In the future I hope to be able to put all these new skills in to action and be able to carry on with the project me and my local youth group are doing. I hope to be able to volunteer as a youth worker and volunteer on every opportunity to do NCS again. It's such a life-changing thing to do and I recommend it to anyone that wants to boost their confidence, make new friends and to meet some very inspirational people."