Services for Young People supported young LGBT+ people to get their voices heard at the rainbow flag raising event at County Hall in Hertford and at the Herts Pride Festival in Watford. On 19 August, the LGBT+ rainbow flag was raised at County Hall in Hertford and the Herts Pride Festival took place the following day at Cassiobury Park in Watford. Services for Young People (SfYP) youth workers and young LGBT+ people who attend SfYP projects took part in both events. A presentation was then given by Hertfordshire Archives and Local Studies called ‘Protest and Change’ which featured an exhibition on the LGBT rights movement from 1965 to the present day. Temi Fawehinmi, Head of Diversity and Inclusion at HCC, also gave a talk on ‘Do we need more rights or the right remedy?’

A member of the SfYP Who Not What project for young LGBT+ people read a poem from the ‘How to be me’ anthology of 50 poems written by young LGBT+ people in Hertfordshire. People in the audience commented on how powerful and moving it was.

The next day, SfYP LGBT+ youth workers and young people from the Who Not What project ran a stand at the Herts Pride Festival and spoke to more than 250 people about the support we provide for young LGBT+ people in Hertfordshire. 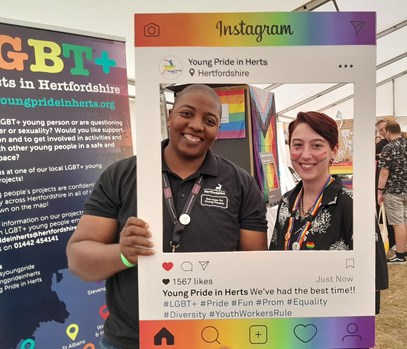 Professionals who work with young people and parents/carers can refer a young person to our projects here: Make a referral.