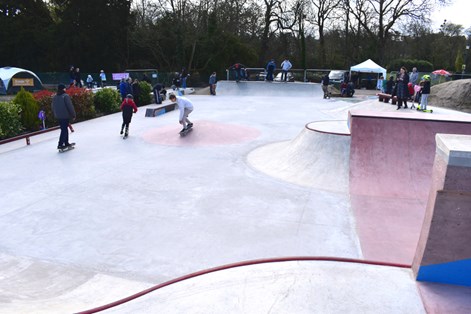 On Saturday 2nd April the new Ware skatepark in Priory Park was officially opened by the Mayor of Ware. The opening event included free tuition from ABC Skateboarding, a DJ, and stalls from local organisations including Services for Young People (SfYP).

Young people attending both the SfYP Ware Street Project and the SfYP Young People’s Participation Project knew that the previous skatepark had fallen into disrepair and wanted to do something about it. With the support of SfYP youth workers, they worked with local decision makers to make their aspirations for a new skate park become a reality. These SfYP projects help young people get their voices heard on issues important to them and become more involved with their local community.

Young people consulted with their peers and liaised with Ware Town Council to review plans and designs, evaluate tenders and raise funds. This helped them develop skills such as teamwork, communication and decision making. Several young people were subsequently recognised for their achievements at the SfYP Young People’s Awards in November 2021.

Visit the SfYP website for more information on the Hertford and Ware Youth Participation Project and for full details of all East Herts projects for young people.

Know a young person who would benefit from joining one of our projects?

Refer a young person to an SfYP project.